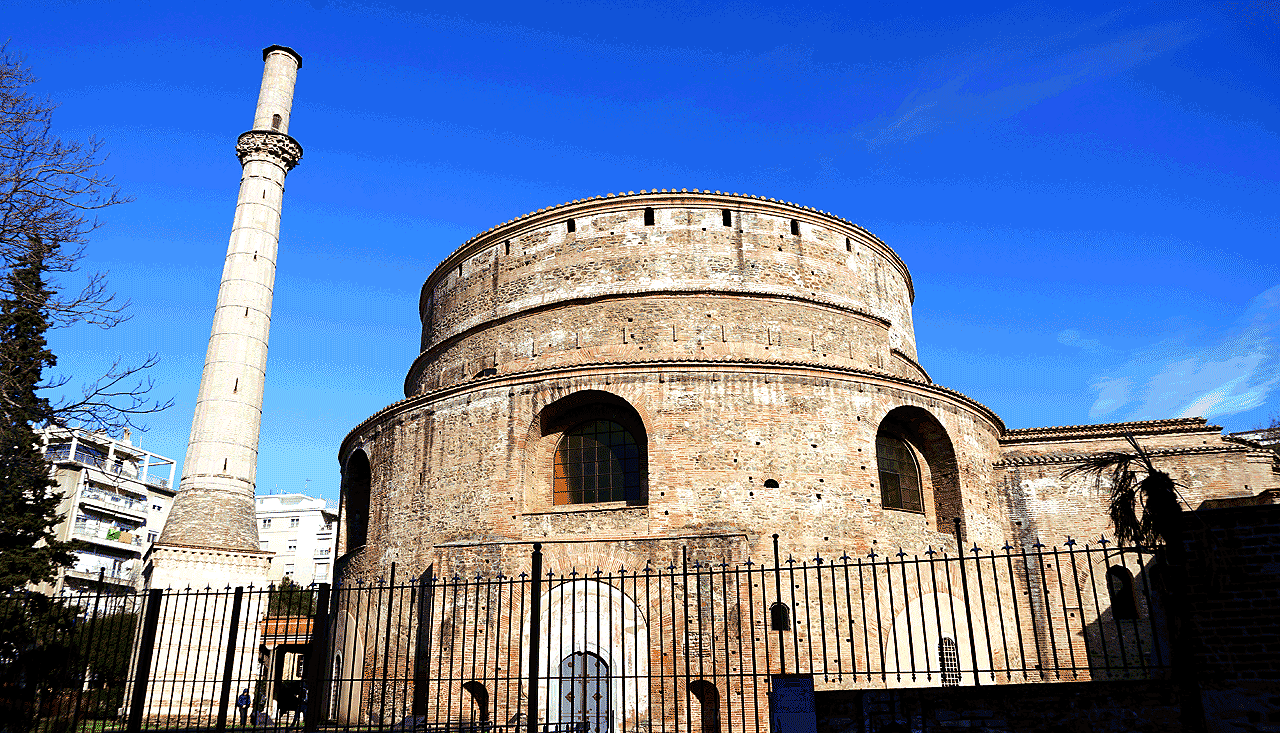 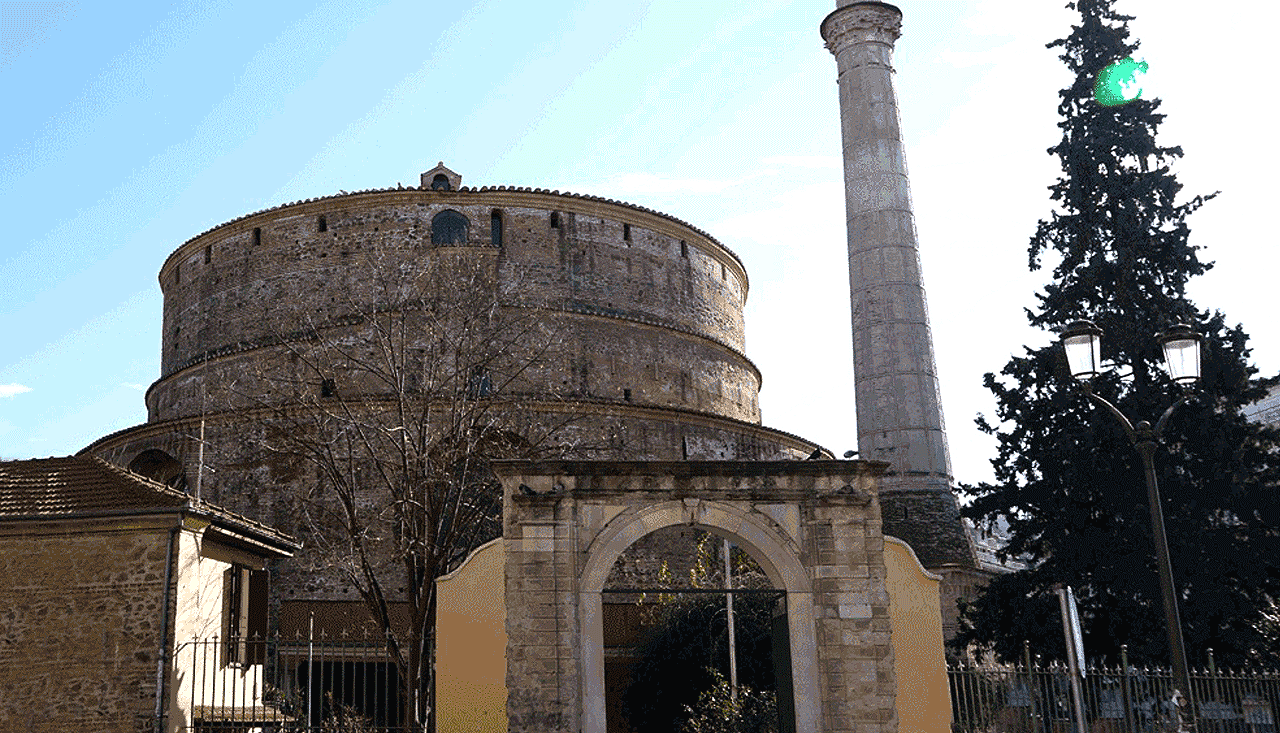 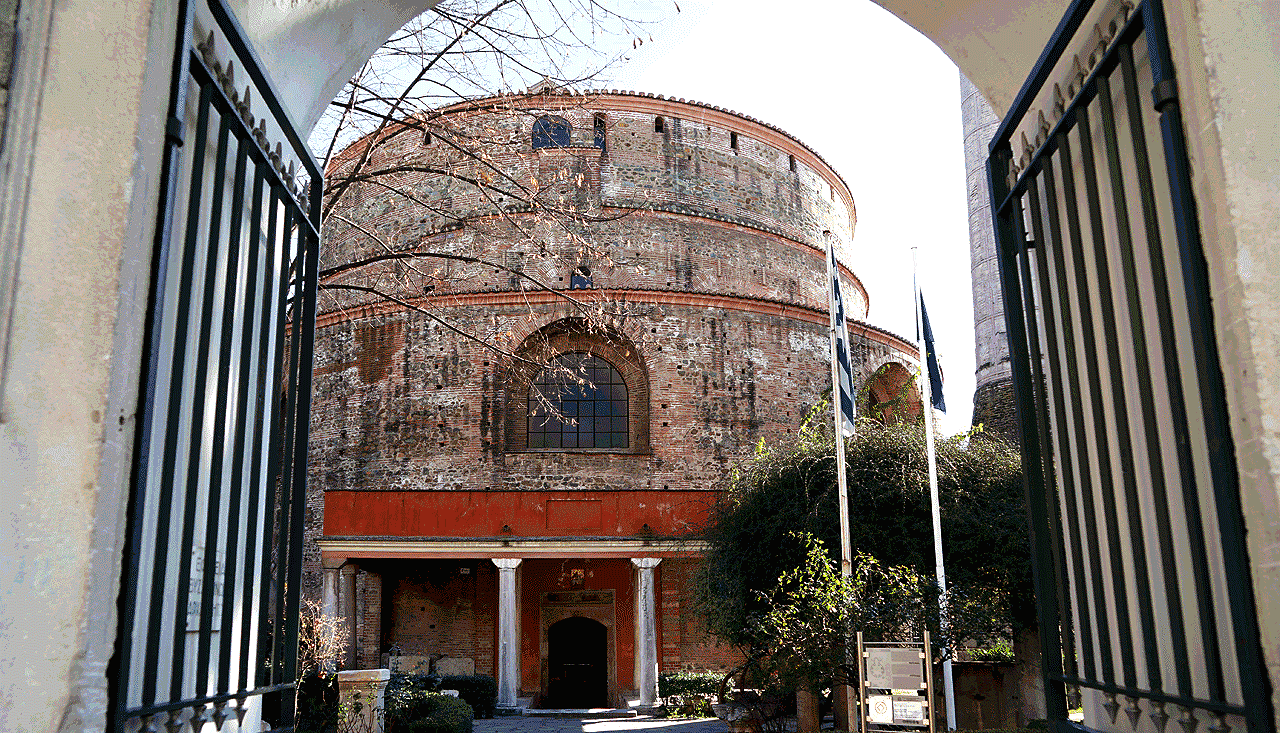 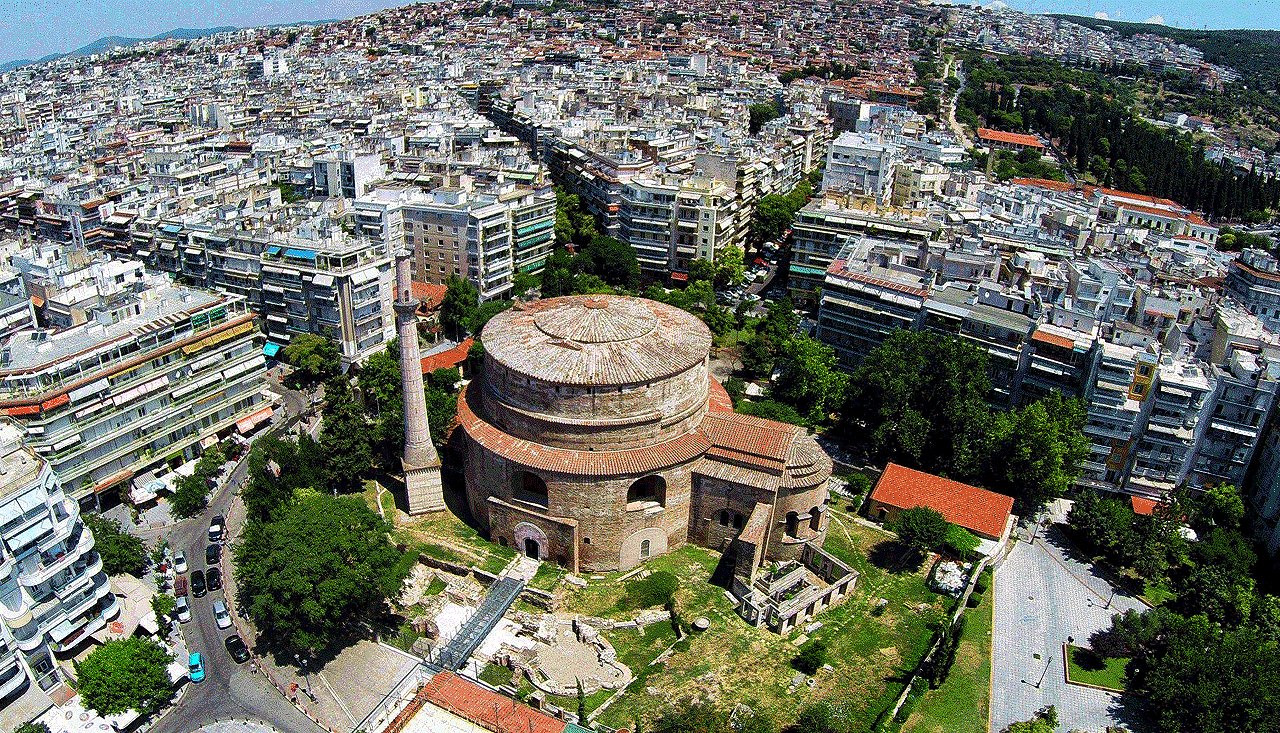 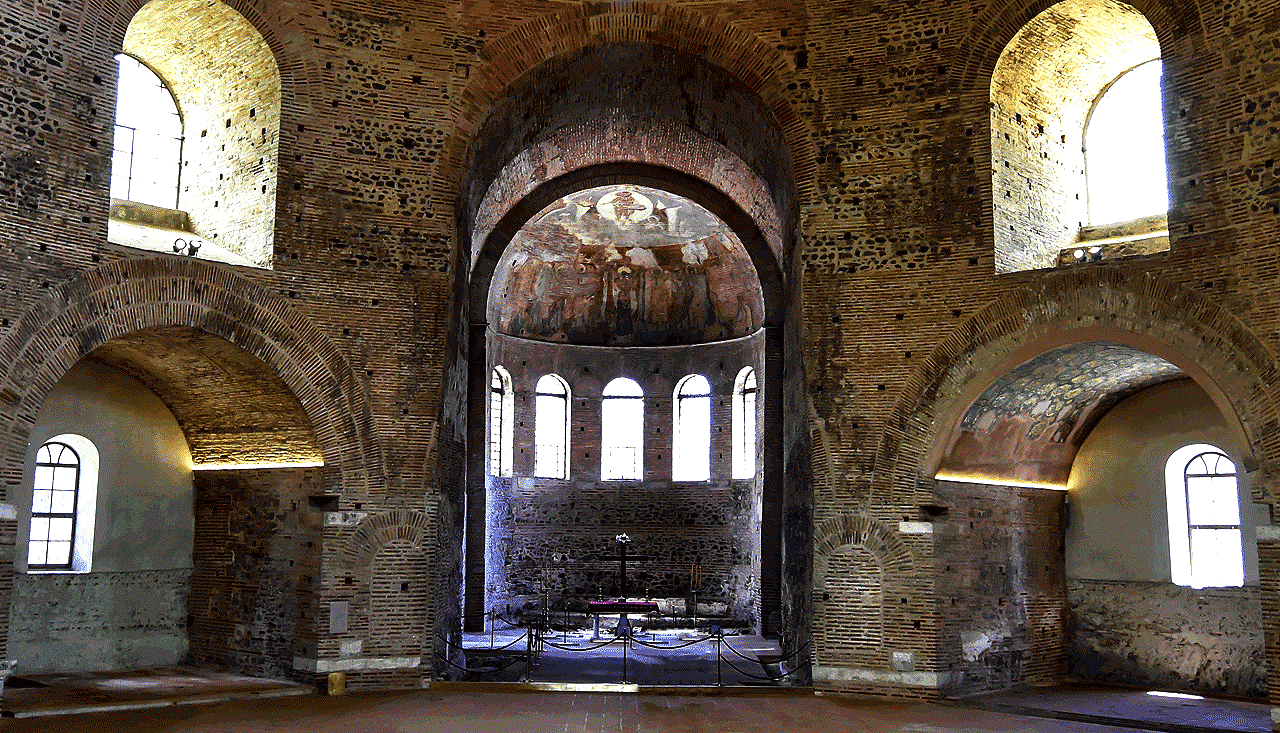 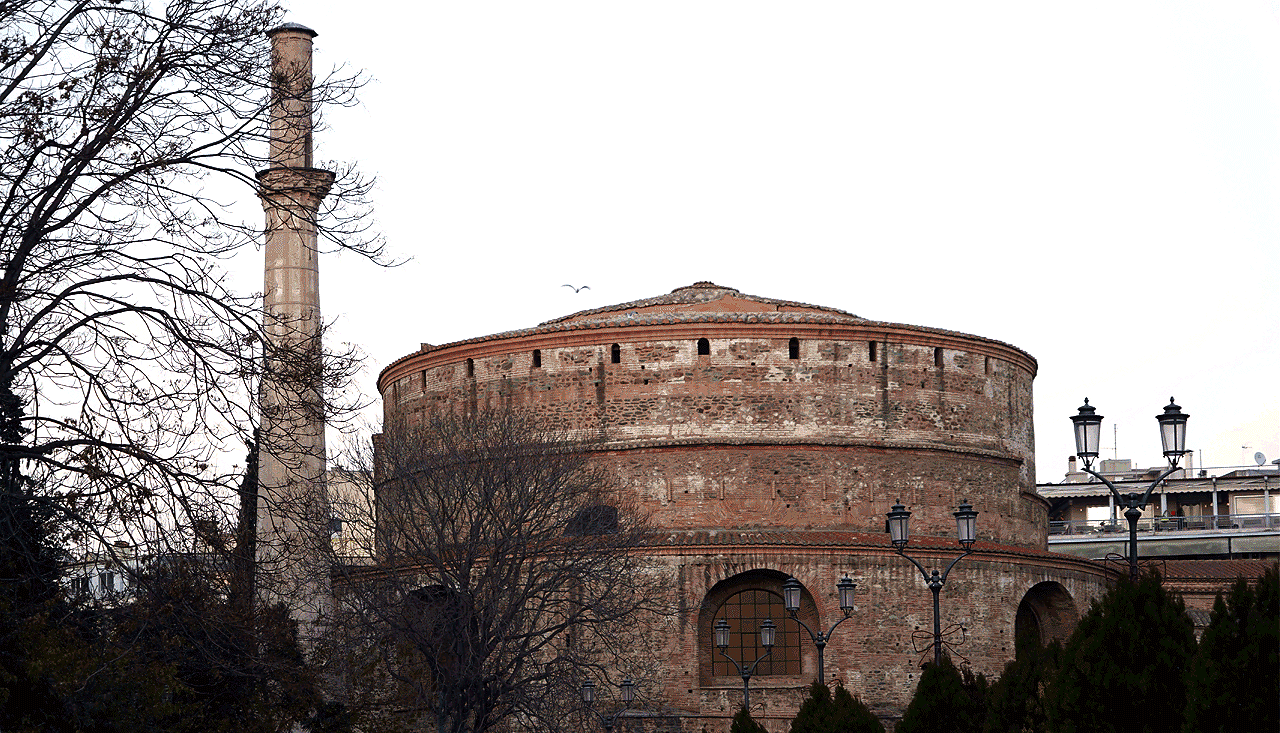 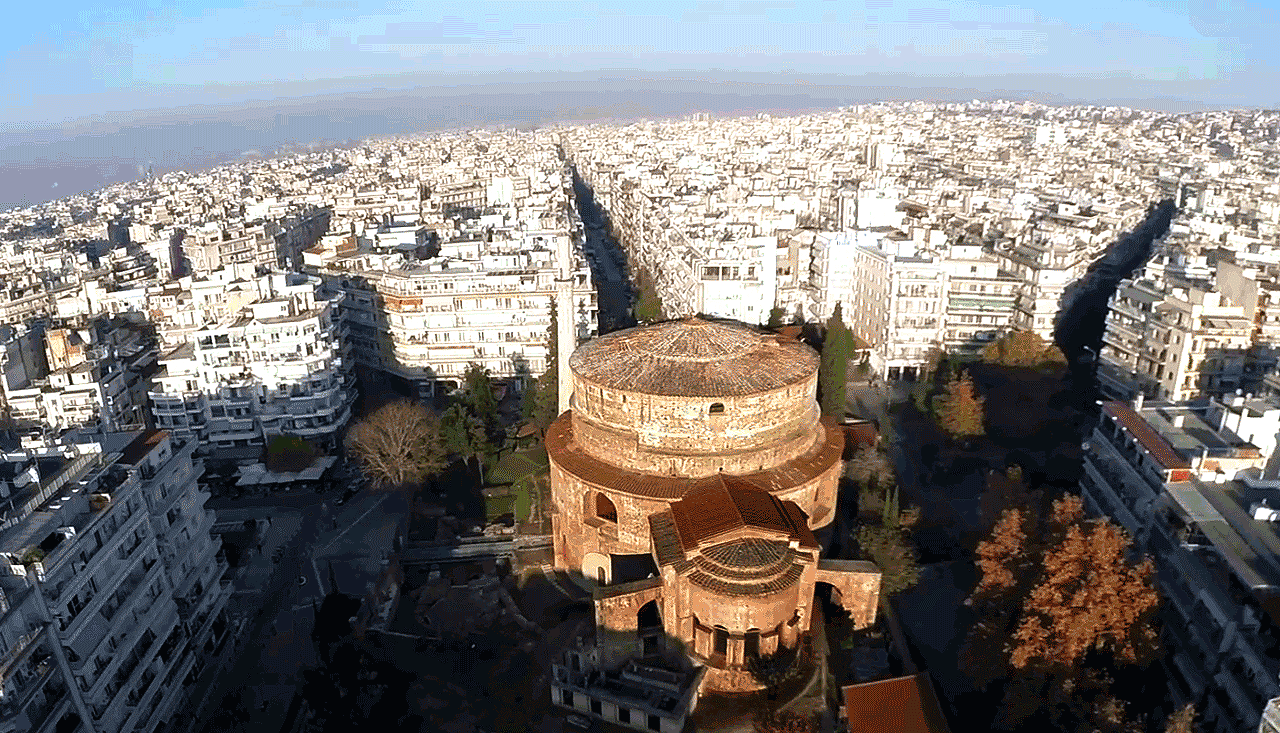 The Rotunda of St. George is located just north of the junction of the two main axes of the city where the Arch of Galerius can be found. It is now one of the 15 Paleochristian and Byzantine Monuments of Thessaloniki that were included in the UNESCO World Heritage List in 1988.

The name Rotunda came from its round shape. It is one of the oldest and more impressive monuments in Thessaloniki. It was built in the first years of Roman tetrarchy, when Caesar Galerius (250-311 AD) was based in Thessaloniki. It was part of the imperial complex, probably in one theory built as Galerius’ mausoleum, but was never used since his mausoleum was found in Romuliana, in Serbia.

During the reign of the Byzantine Emperor Theodosios the Great (379-395 AD) it was converted into a Christian church. It was then that a rectangular area with a semicircular apse was added in the eastern side in order to serve as the sanctuary of the church dedicated to the Archangels, while it took its present day name (Church of Agios Georgios) from a nearby chapel of Agios Georgios.

The circular building, with a diameter of 24m, is roofed by a dome with a height of 30m. The cylinder wall is 6,30m thick and is divided in its interior into eight rectangular conches, from which the southern one was the main entrance.

The most brilliant remains of the Early Christian phase of the monument, however, are its outstandingly beautiful mosaics — the earliest mural mosaics in the Middle East —which were the work of an excellent local mosaic workshop.

Of particular interest are the mosaics, of exceptional quality, which are considered the most beautiful of the early Christian years. From the decoration of the dome that still survives we understand that it depicts Christ’s Second Coming. Better preserved on the lower part are the saints, who are in front of an architectural setting. At the arches of the conches various decorative themes can be seen.

At the altar’s conch there is a wall painting of the Ascension of Christ that dates from the second half of the 9th century.

In 1591, the Turks converted it into a mosque. When Thessaloniki was liberated in 1912 and until 1920 it was used again as a place for Christians. Today the church of Agios Georgios, the Rotunda, is one of the most important archaeological sites of the city.

Source: ARCHDIOCESE OF ATHENS and Wandering in Byzantine Thessaloniki by E. Kourkoutidou-Nikolaidou

Telephone: +30 2310 209913
Website:
Directions -> How to get there
More in this category: « Church of Hagia Aikaterini Church of Agioi Apostoloi »
back to top