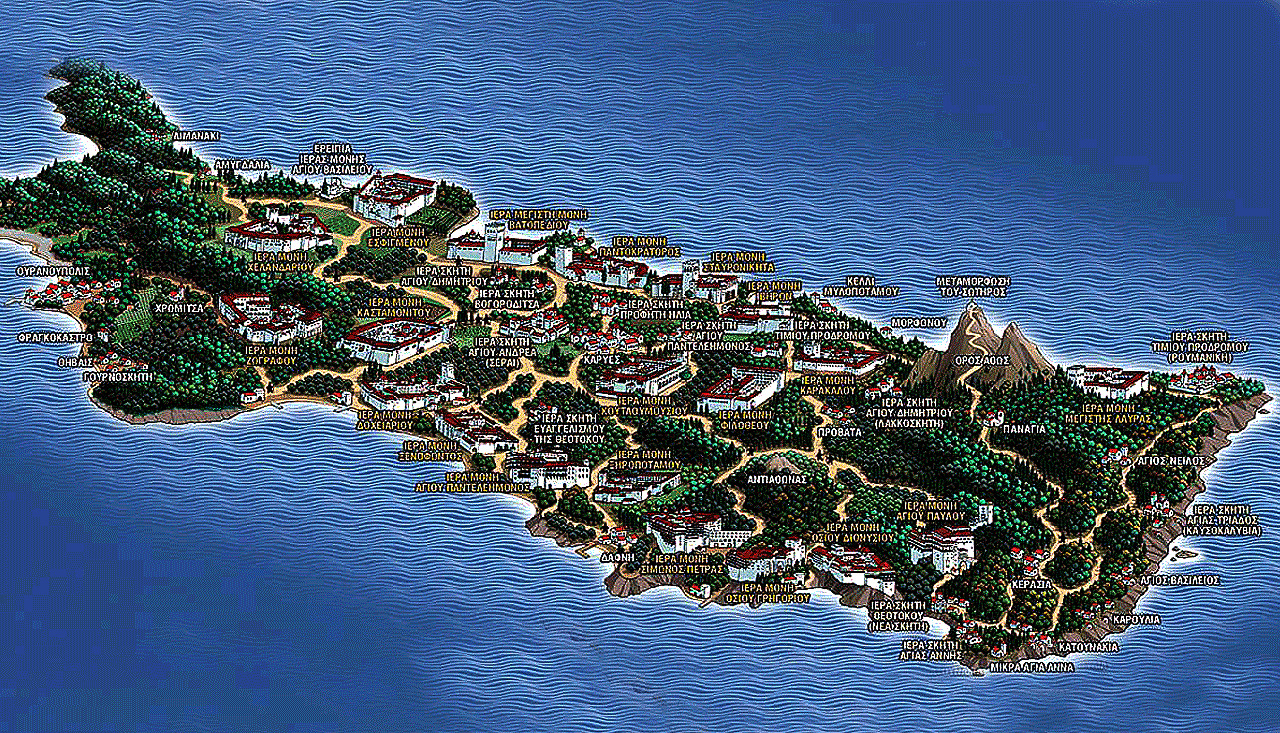 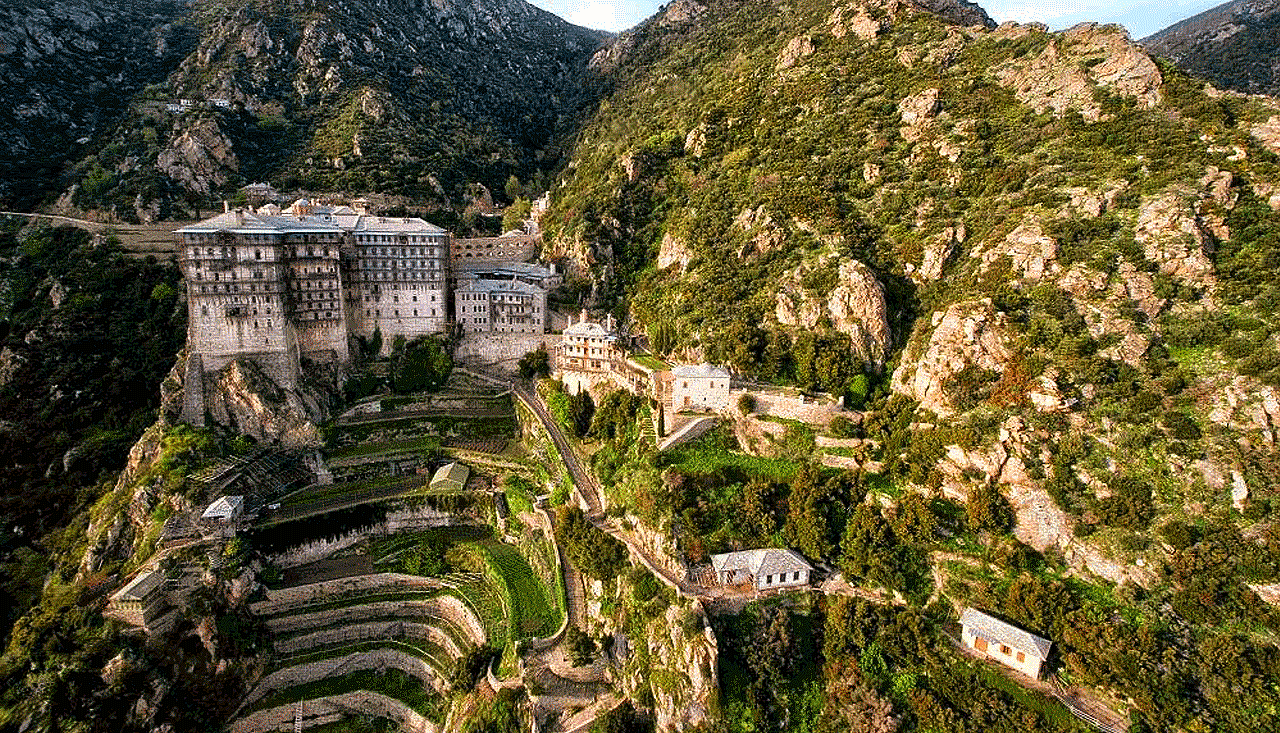 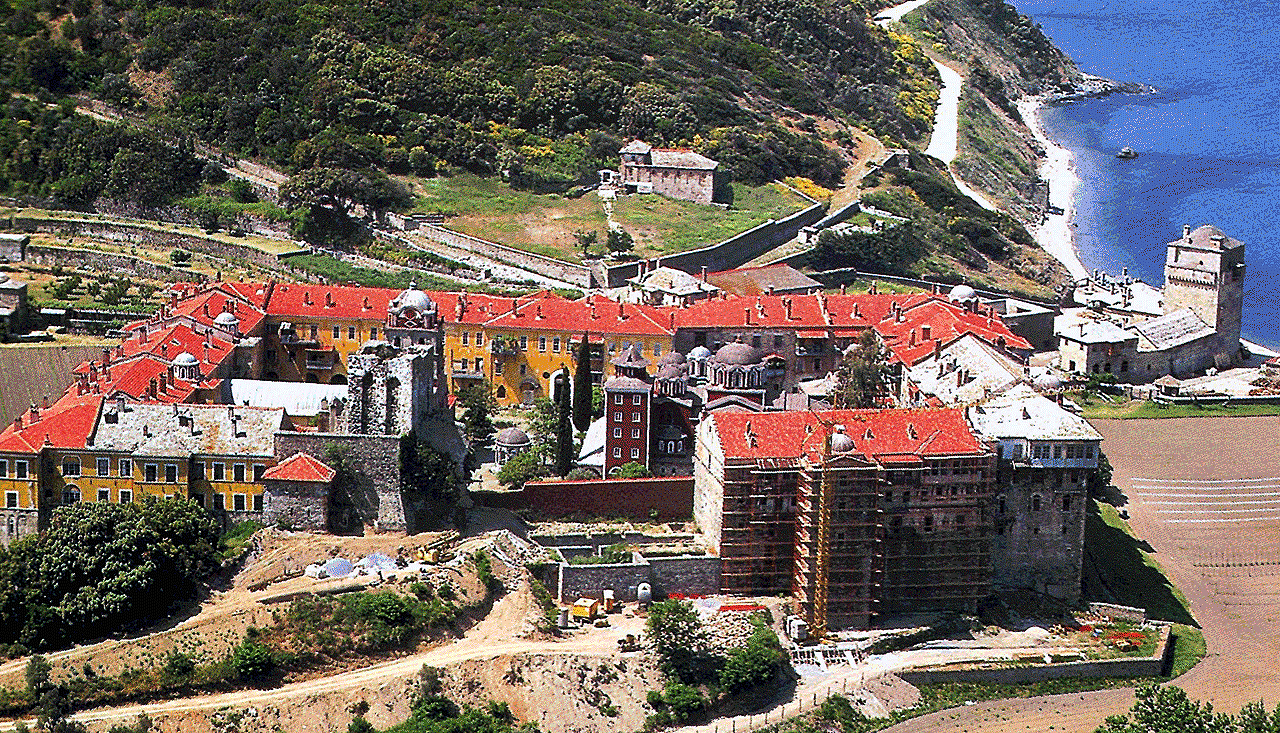 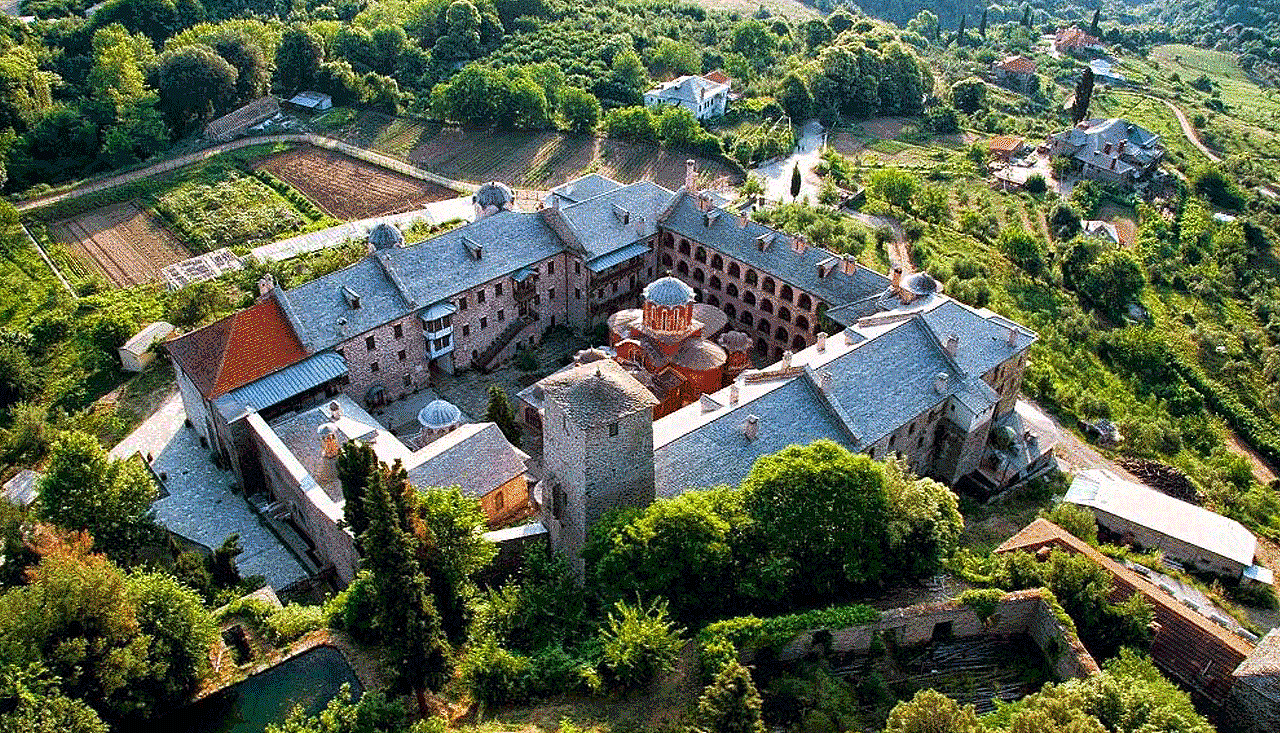 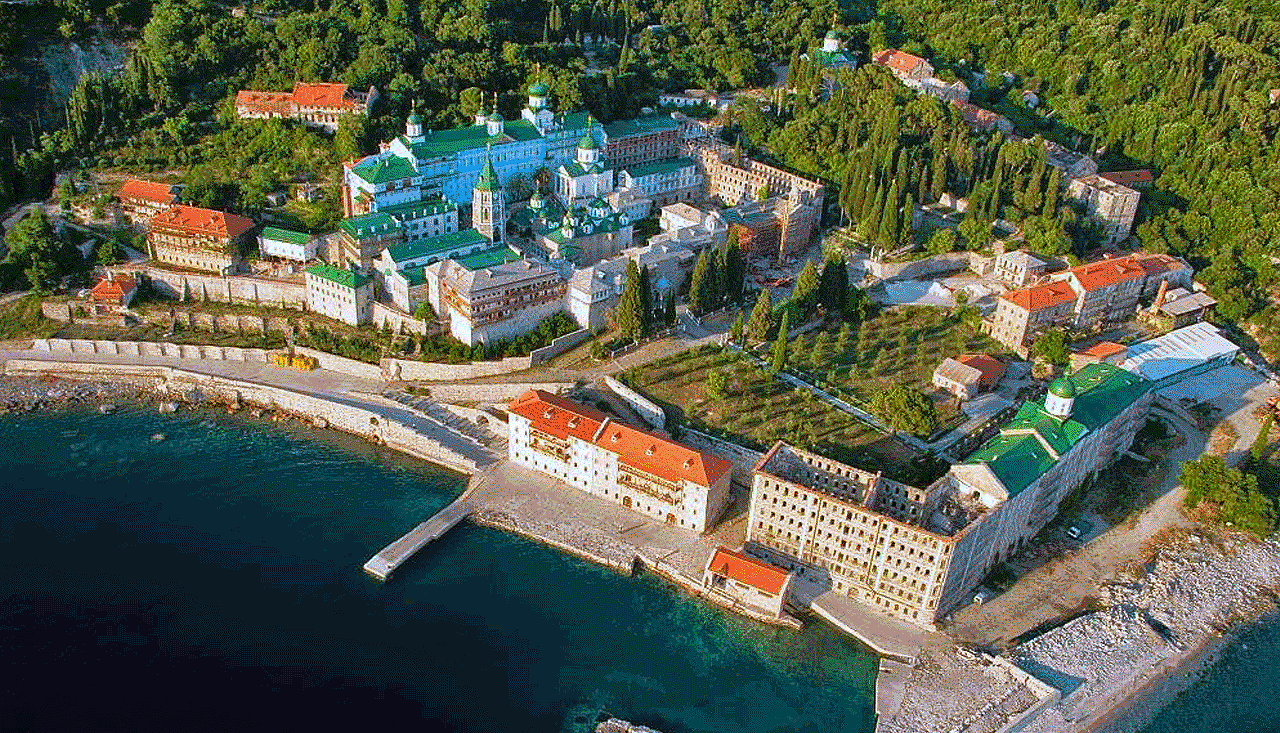 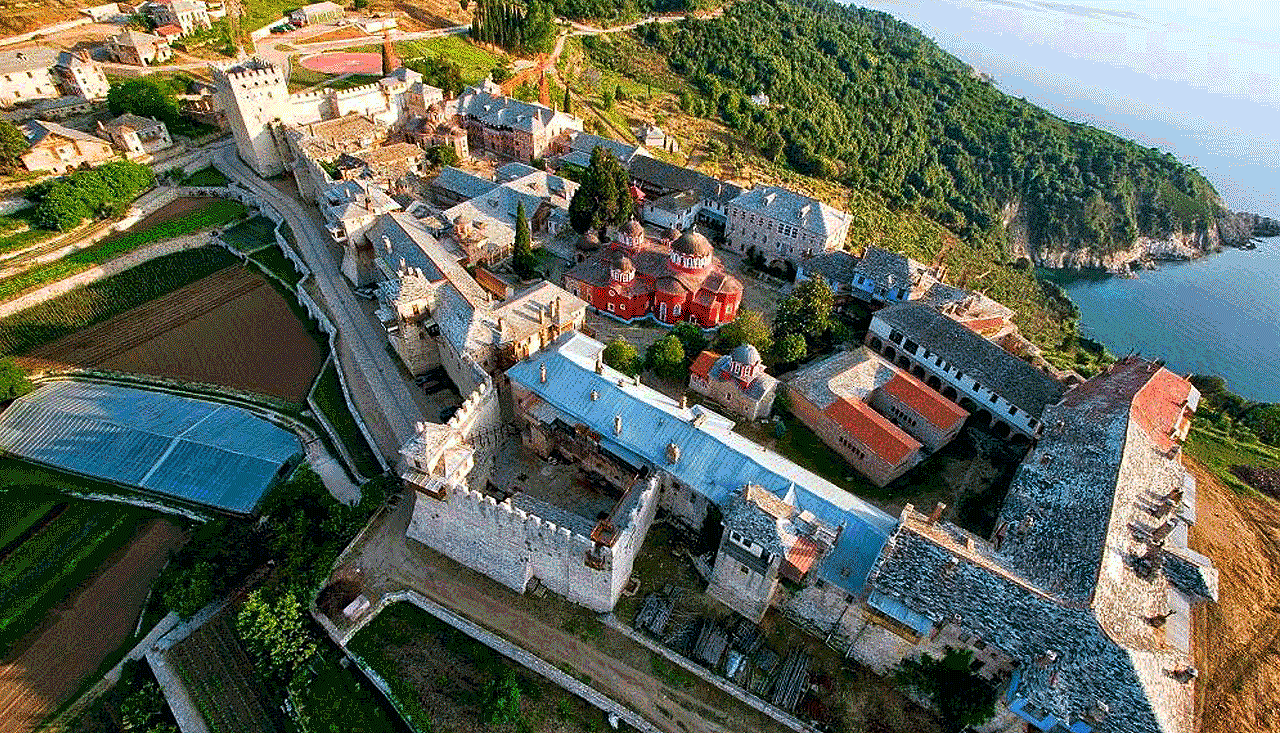 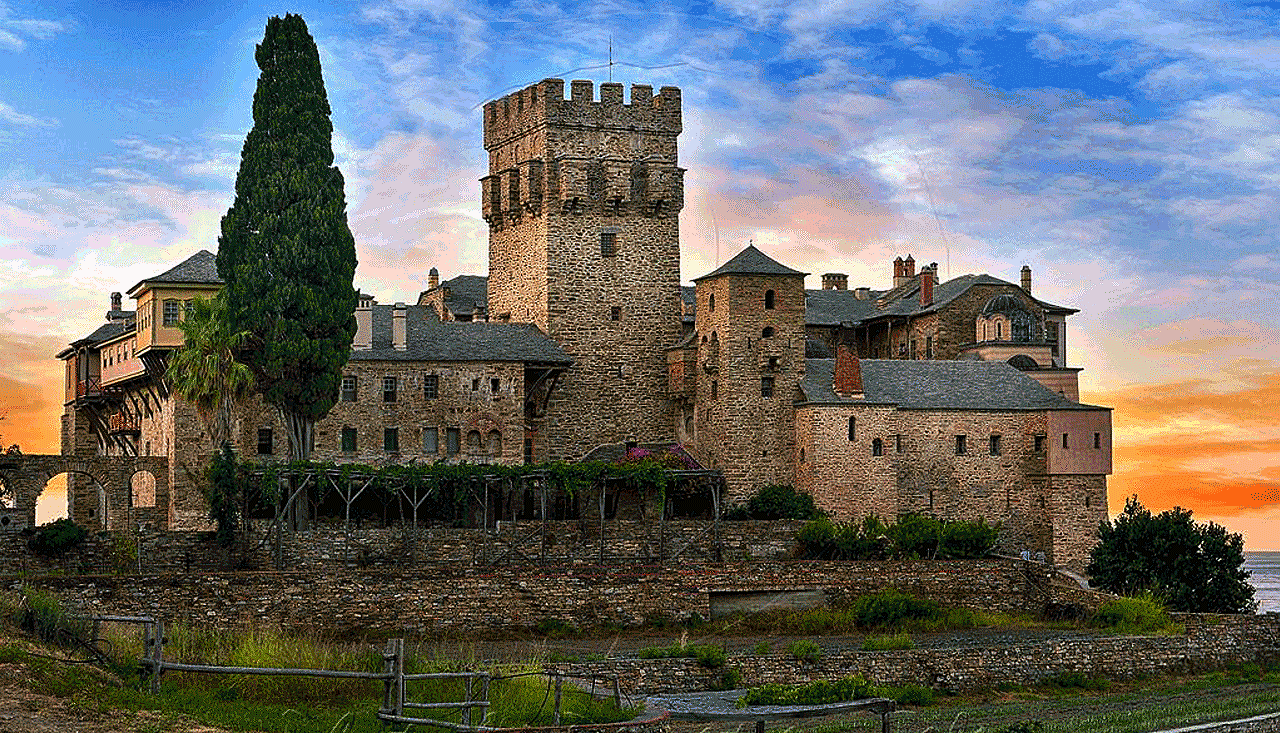 Mount Athos -commonly known as the Agion Oros (Holy Mountain) is the spiritual capital of the Orthodox Christian world, consisting of 20 monasteries, 12 skites, and about 700 houses, cells or hermitages and approximately 2,000 monks.

Agion Oros, as it is locally known, is the oldest surviving monastic community in the world. It dates back more than a thousand years, to Byzantine times. It is a unique monastic republic, which, although part of Greece, it is governed by its own local administration.

The “Garden of Virgin Mary” is the paradise of the eastern peninsula of Halkidiki! The Monastic State of the Holy Mountain is known to be the main carrier of Orthodox Christianity and holds spiritual glory and great history. It is a religious community with 1.000 years old monasteries, cells in caves or between the rocks, towers, domes, belfries, chants, etc. It is listed in UNESCO’s WORLD HERITAGE MONUMENTS.

According to the legend Panagia, the Virgin Mary and Mother of God, was sailing accompanied by St John the Evangelist on her way from Joppa to Cyprus to visit Lazarus. When the ship was blown out of course to then pagan Athos it was forced to drop anchor near the port of Klement, close to the present monastery of Iviron. The Virgin walked ashore and, overwhelmed by the wonderful and wild natural beauty of the mountain she blessed it and asked her Son for it to be her garden. A voice was heard; "let this place be your inheritance and your garden, a paradise and a haven of salvation for those seeking to be saved". Since that moment the mountain was consecrated as the garden of the Mother of God and is out of bounds to any other women.

The first historical reference of the Mountain as a monastic centre is in a passage stating that monks from Athos took part in the Council of 843 AD, convened by Theodora the Byzantine Empress, to discuss the restoration of the Holy Icons. In 885 the Emperor Basilios the Ist issued a Chrysobullo (imperial edict) officially recognising Athos as a territory belonging exclusively to monks. It declared that only religious men should live there and all other laymen, shepherds etc, were forbidden to enter the "Garden of the Virgin".

The first organization of the monastic way of life becomes true with the charter (Typikon) of St Athanasios, which resulted to the interference of the state through John Tsimiskis who gave the Charter (Typikon) that is still in force today. Initially there where only individual monasteries but later on they were organized into a monastic state.

The first two centuries of this period, more than 180 monasteries were founded with over 20.000 monks. Later on, most of them were destroyed by the Crusades and the Pirates.

Even the emperors themselves built monasteries. The Balkan Christian Kings also took notice of Mount Athos .The Russians founded and supported monasteries. Russia, under the governance of the Tsar, provided great economic aid to the St Panteleimonos monastery.

The Athoniada college was founded in 1748, a philosophic and theological school for the whole of Greece, initially run by Neofytos Kafsokalivitis and then by Evgenios Voulgaris (1753).

Mount Athos was autonomous. This right was initially granted to it by Nikiforos Fokas and John Tsimiskis and was preserved down to the era of the Turkish domination. The inhabitants of Mount Athos submitted to the Turkish rule and they were therefore treated favorably.

In 1821 it was taken by the Turks and the revolution of Halkidiki was drowned in blood. Then the Turks left a guard that the monasteries had to support. The occupation of Mount Athos by the Turks lasted until 1830.

In 1926, Mount Athos became a self-governing part of the Greek State in accordance with the constitutional decree of Lozanne (1924).According to it, depends on the Patriarchate of Constantinople and is supervised by Greece.

Following the Protocol of the monastic state, that says that only men are allowed visiting Mount Athos. Visitors should contact Holy Executive of the Holy Mount Athos Pilgrims’ bureau offices in order to obtain a written permit, prior to their visit. This is a mandatory procedure since the number of visitors is limited to only ten permits a day for non-orthodox visitors (foreigners) and 100 for Greeks and Orthodox visitors. Women can cruise along the west coast of Mount Athos and admire that beauty of nature and the monasteries.

According to the written rules of Mt Athos, it's forbitten for women to enter by any means or stay anywhere in the monastic state. This prohibition is called Αvaton in Greek. Ant breach of the rule is a punishable offence, because Mt Athos is dedicated to one woman whom all the monks honor and pray to; the Blessed Mary.

Contacts of the Holly Monasteries and Skites

Pilgrims who wish to stay overnight in the Holy Monasteries or Skites must reserve a place beforehand.